Home/Eleanor Woolley
Rating :
out of 5

Professional Artist 2010 Professional Cabinet Maker from 2006-2012 Cabinet Making and Furniture Restoration City and Guilds 2004-2005. BA Hons Sculpture, Bretton Hall, Leeds University 1998-2001. Art Foundation Pitville Cheltenham 1997. Eleanor Woolley was born in the Channel Island of Jersey, and moved to Gloucestershire where she was drawn to the outdoors, always taking walks in the landscape. Her first true love for painting came from an inspirational Art teacher at Haberdashers Monmouth School for Girls. During this period she was fortunate enough to work under Mary Fedden in her studio and Portrait Sculptor Peter Lambda with whom she further developed he technique and composition. She learnt to paint using classic oil painting techniques, and was drawn to the figure from early life drawing lessons. After gaining her BA Hons in Sculpture Eleanor Studied Furniture making and worked as a Cabinet Maker before returning to fine art painting. Her inspiration is taken from her surroundings, experimenting with colour and form. Her paintings are vibrant, painted Al Fresco and finished in the studio. Starting with bold outlines, many layers of paint are used to create the depth of colour. Eleanor is influenced by the work of Painter Frank Brangwyn, and his representations of the human form. Leading to her passion to paint people in their working environments. It is a documentation of the everyday that is often missed. Capturing the concentration of a Sushi Chef, or a Barista pouring coffee, the banter between workmates and the glances of intimacy. Eleanor’s depiction of shoppers on the high street explores the play of shadow and light when the sun leaves its long shadows on the ground. The faces of these people are blurred as the light bleaches their features. There is a suggestion of loneliness, in this age where identity has become so important yet these faceless individuals are almost unaware of each other. anonymous figures, busy in their solitude, their shadows touching each other as they rush by. Eleanor spent time with Giffords Circus where she was able to watch the rapport between performers backstage. Sketching and photographing to develop her compositions, she works quickly with bight colours to depict the human form with large brushstrokes. The speed and control of the brush having such a large effect on the spirit of the painting. Often foregrounds merge into the background as she captures the movement of the figure, as the performers prepare before the intensity of the show. Eleanor still lives in her childhood home in Gloucestershire surrounded by the countryside and people she loves to paint.To discuss any paintings by Ellie Woolley please call 07799 535765 or email deborah@wychwoodart.com. 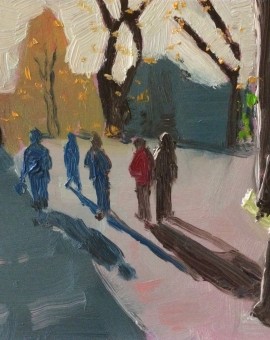 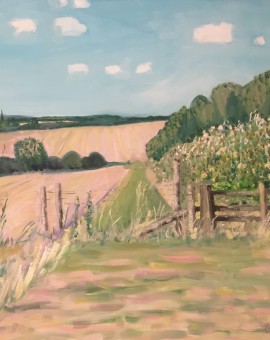 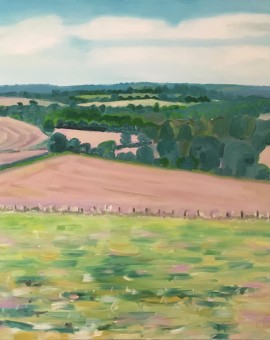 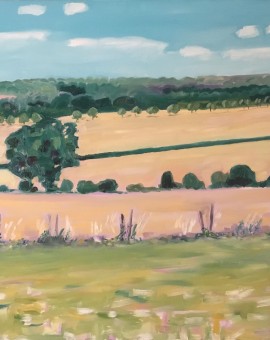 Across the fields from Aynho, Eleanor Woolley, Affordable art online
£600.00 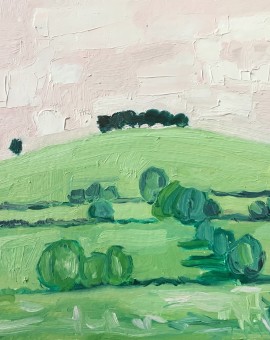 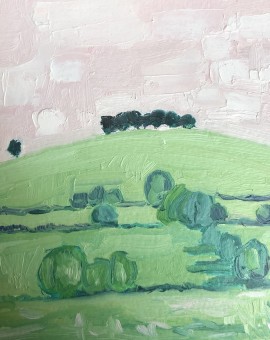 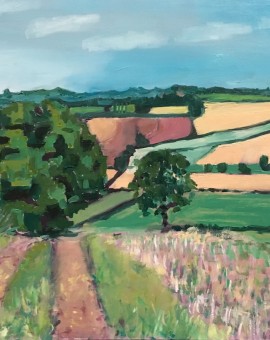 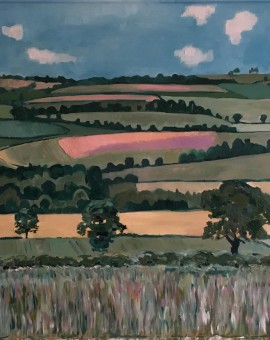 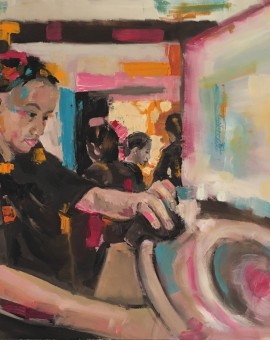 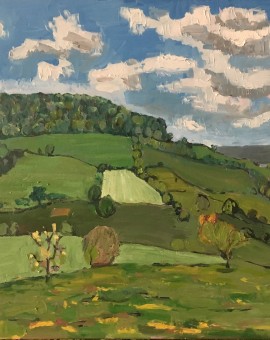 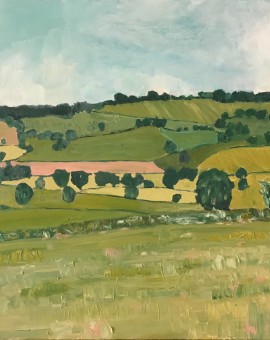 Looking over to Maugersbury Hill
£550.00 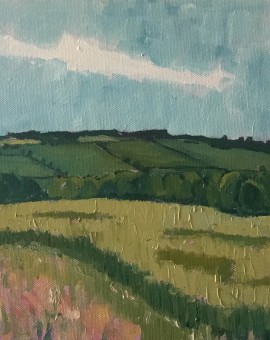 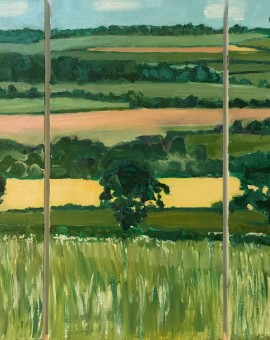 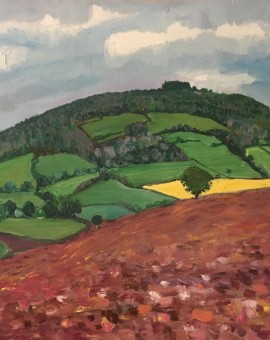 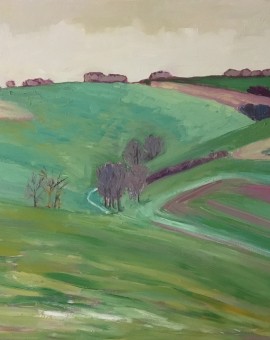 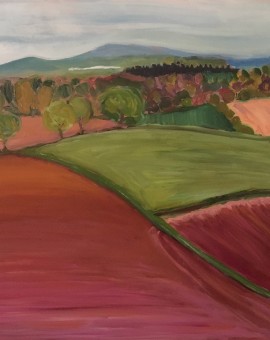 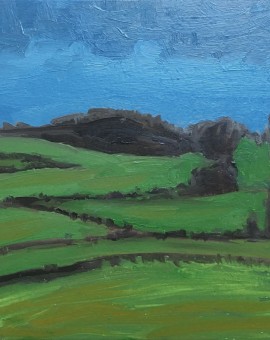 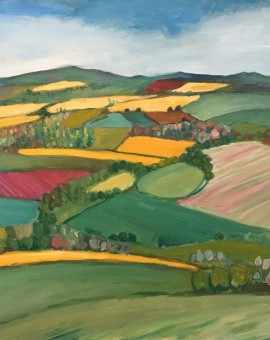 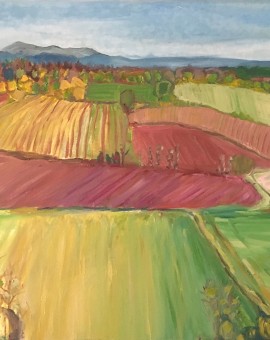 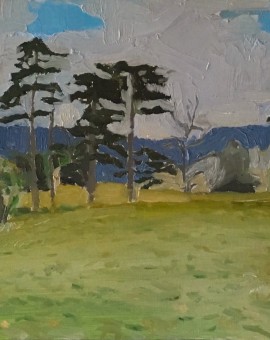 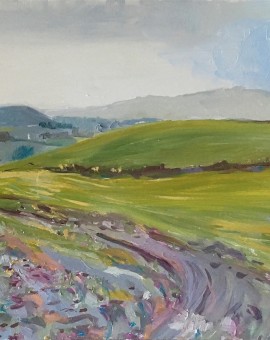 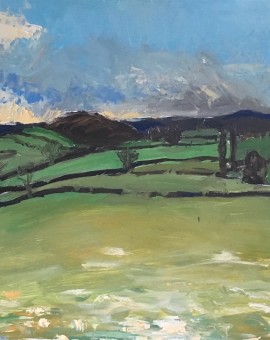 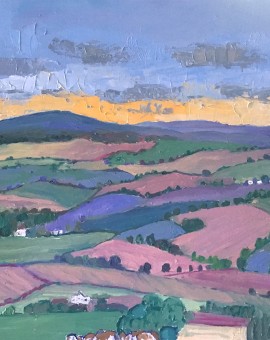 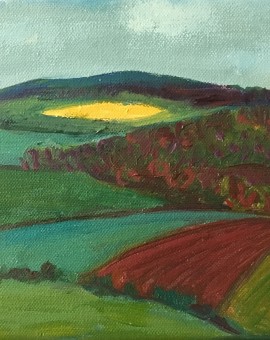 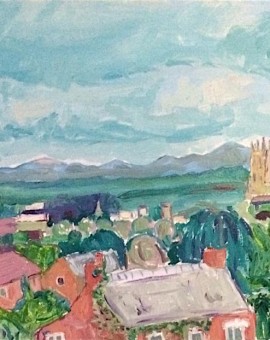 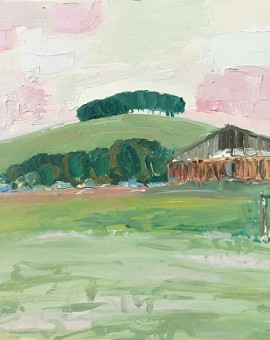 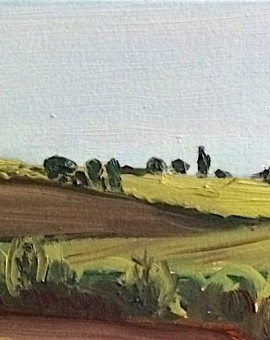 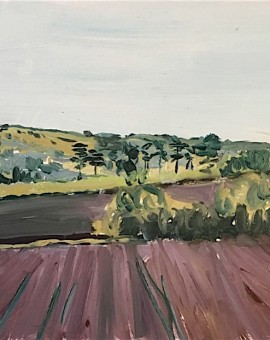 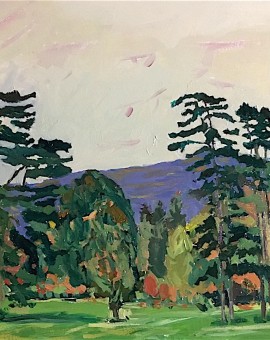