Home/Paul Treasure
Rating :
out of 5

Discover original paintings by Paul Treasure available to buy online and in our art gallery with Wychwood art. Paul Treasure was born in 1961 in Gloucestershire and studied at Cheltenham College of Art. He then moved to London where he worked from his studio in Holborn as an established and highly regarded artist, taking on commissions for public works of art worldwide, as well as for private clients. In 1991 he took a year’s sabbatical to paint whilst travelling the world, this journey took him through Africa, India, Southeast Asia and Central America. On his return he moved to Hampshire where he had several solo sell-out shows exhibiting these works. Following this, in 1993, he was commissioned to be expedition artist on the first ever crossing of the Taklamakan Desert in North West China for three months, after which he exhibited these works at various shows, including the Royal Geographical Society in London. Paul’s style is expressive, energetic and full of colour. His paintings capture the feeling and emotion of a place, whilst depicting the interplay between light, land, water and sky. His dramatic interpretations of the English landscape show his response to the ever-changing seasons, weather and light; and his bold use of palette knife, brush strokes and mixed media, result in distinctive mark-making, culminating in vigorous, textured landscapes. He continues to exhibit around the country, whilst still travelling abroad regularly to find inspiration for his paintings. His most recent work is inspired by the landscapes and coastal areas of England. To discuss any of Paul Treasure's works please email deborah@wychwoodart.com or call 07799 535765. 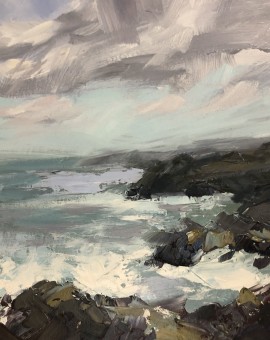