Richard Cook is a leading British painter living and working in Newlyn, Cornwall. Cook has been exhibiting for over 25 years and has received countless awards including from the British Council, the Arts Council and The Elephant Trust Award (twice). In 2001 he was given a solo show at Tate St Ives with a related publication, and a major painting was acquired for the collection in 2006. Further works are held in the British Museum collection. Richard Cook’s work has been in countless exhibitions across the world and today sits in permanent collections at The Tate, London, The Arts Council, London, The British Museum, Manchester City Art Gallery and with Deutsche Bank, London. Richard Cook’s paintings are a combination of the constant and the fleeting. His landscapes show places that are always there, but the moment he visits them to make his preparatory drawings are not. Each time, the people will be different and the weather conditions will have altered, often radically so. The trees, buildings and other topographical features provide the framework for the true subject of the painting; the artists’ own place in that landscape and his personal response to the ever-changing light. For Richard Cook, the act of painting is an attempt to pin down a memory of a precise moment and to render the impermanent permanent. Richard Cook is a contemporary of Richard Long, who was in the year before him at St Martins, both artists transmute – in very different ways – their experiences of nature into their art. Cook has a real appreciation and understanding of the English landscape tradition. Since his successful exhibition at Tate St Ives, Cook has worked intensely for years at achieving a mature frequency of style with a vocabulary that is recognizably his. For Cook colours are strongly associated with the emotions and in a sense the emotions take on a physical form in his paintings. The subtlety of tone and hue expressed in these works is noticeably reticent and tone is deployed with rigorous efficiency throughout. Cook is attracted to bleak, rough, elementals aspects. We are delighted to be able to offer an exclusive, historical selection of Richard’s pieces that have hitherto remained “off-grid” and are now available for the first time. Richard Cook Biography 2012 Kestle Barton Cornwall 2016 Felix and Spear London 2019 In Thy Wild Garb, Torrington SELECTED GROUP EXHIBITIONS 1976 The Human Clay, Hayward Gallery, London 1976-80 The Artist’s Market, London 1980 British Art 1940-1980, Hayward Gallery 1981 The Camden Arts Centre, London 1982 Summer Show, Serpentine Gallery, London 1985 A Singular Vision, The Royal Albert Memorial Museum, Exeter 1987 Looking West, Newlyn Art Gallery and the Royal College of Art 1989 School of London, Works on Paper, Odette Gilbert 1990 A Century of Art in Cornwall, County Hall, Truro 1992 Painting in Cornwall, Royal West of England Academy, Bristol 1993 Invited Artist, Summer Exhibition, Royal Academy, London 1993 Recent Acquisitions, British Museum 1994 Inside Outside, Anne Berthoud Gallery, London 1996 Mixed Exhibition, Connaught Brown, London 2005 Mixed Doubles, Art First, London 2006 Drawing Inspiration: Contemporary British Drawing, Abbot Hall, Kendal 2007 Art Now, Tate St. Ives 2018 Modern Art and St Ives ,Tate St Ives TELEVISION & RADIO 1989 The Box Office, Featured Artist, Channel Four 2001 Night Waves, Radio 3 AWARDS 1968 Painting Bequest, St. Martin’s, London 1969 The David Murray Award 1969 British Council Award 1992 The Elephant Trust Award 2001 Commissions Award, Arts Council, England 2001 The Elephant Trust Award 2003 Artist’s Award, Arts Council, England COLLECTIONS Permanent Tate Collection, London Permanent The Arts Council London  Permanent The British Museum, London Permanent Manchester City Art Gallery  Permanent Deutsche Bank, London 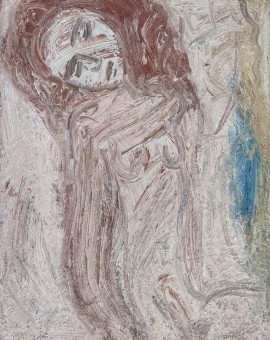