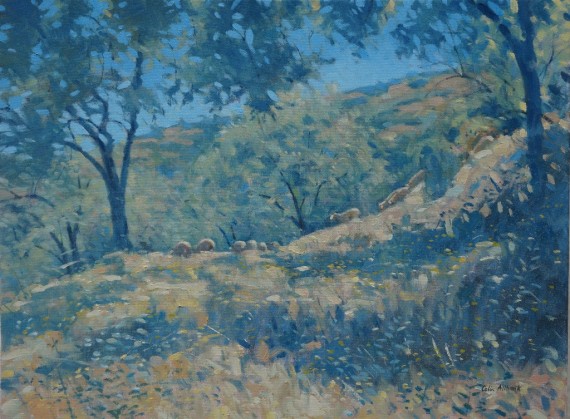 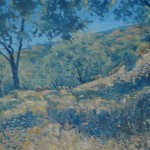 Click here to View all artworks by Colin Allbrook 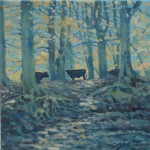 Under the beech trees 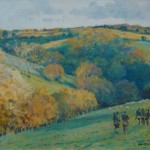 Colin Allbrook
Almond trees, sheep, Southern Spain.
An oil painting on canvas painted after a trip to Spain. In Andalucia among the high slopes the sheep with their clanging bells roam the almond groves grazing amongst the trees and wild flowers found here. The intense sun casts cool pools of shadow in the groves as it shines from the clear blue sky. Paited in 2015 this measures 46 x 61.

Colin Allbrook is one of the most respected and renowned painters in the South-West of England. Working in both oils and watercolours and through the use of light and colour, Colin depicts the life and activity of the area. His work is regularly selected for prestigious exhibitions such as the Sunday Times Watercolour competition and the Royal Institute of Painters in Oils. He is an elected member of the Royal institute of Painters in Watercolour (RI), the Royal Society of Marine Artists (RSMA) and the Society of Equestrian Artists (SEA). He has received many awards for his work, including, in 2009, both the Turner Watercolour Award and the Rowland Hilder Award for landscape painting at the Royal Institute of Painters in Watercolour exhibition. He has also twice won the 'Terence Cuneo' medal at the SEA and the 'Excellence in Watercolour' prize at the Royal West of England Academy four times. Selling mainly through exhibitions & galleries his paintings are in private and corporate collections throughout the world. Colin has lived and worked in Umberleigh in Devon for over 30 years, where he has a studio by the River Taw, in a beautiful area which inspires so much of his work. If you'd like any more information about Colin's works, please contact Deborah@wychwoodart.com or call 01869338155 / 07799535765.