Click here to View all artworks by Gerard Tunney 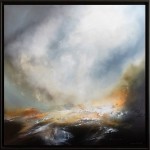 Gerard Tunney
Queen Mab
Sold Unframed
The painting is based on Mercutio’s speech from “Romeo and Juliet”.Mercutio makes fun of Romeo who is a romantic dreamer and uses Queen Mab who enters our dreams to fulfill whatever we wish for despite it being an illusion Unlike Romeo, Mercutio does not believe that dreams can foretell future events. Instead, painting vivid pictures of the dreamscape people inhabit as they sleep, Mercutio suggests that the fairy Queen Mab brings dreams to humans as a result of men’s worldly desires and anxieties. His eloquent speech touches on a number of the play’s opposing themes such as love and hate, fantasy and reality, idealism and cynicism.
The painting depicts the dream sequence of being like a slideshow where images overlap, merge, disappear, etc.
Theatre, shakespeare, surreal, dream, fantasy