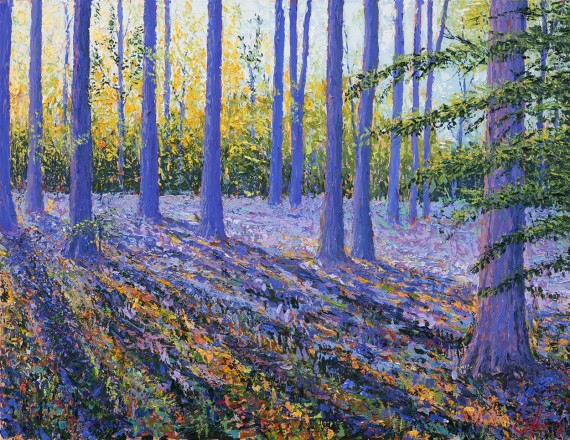 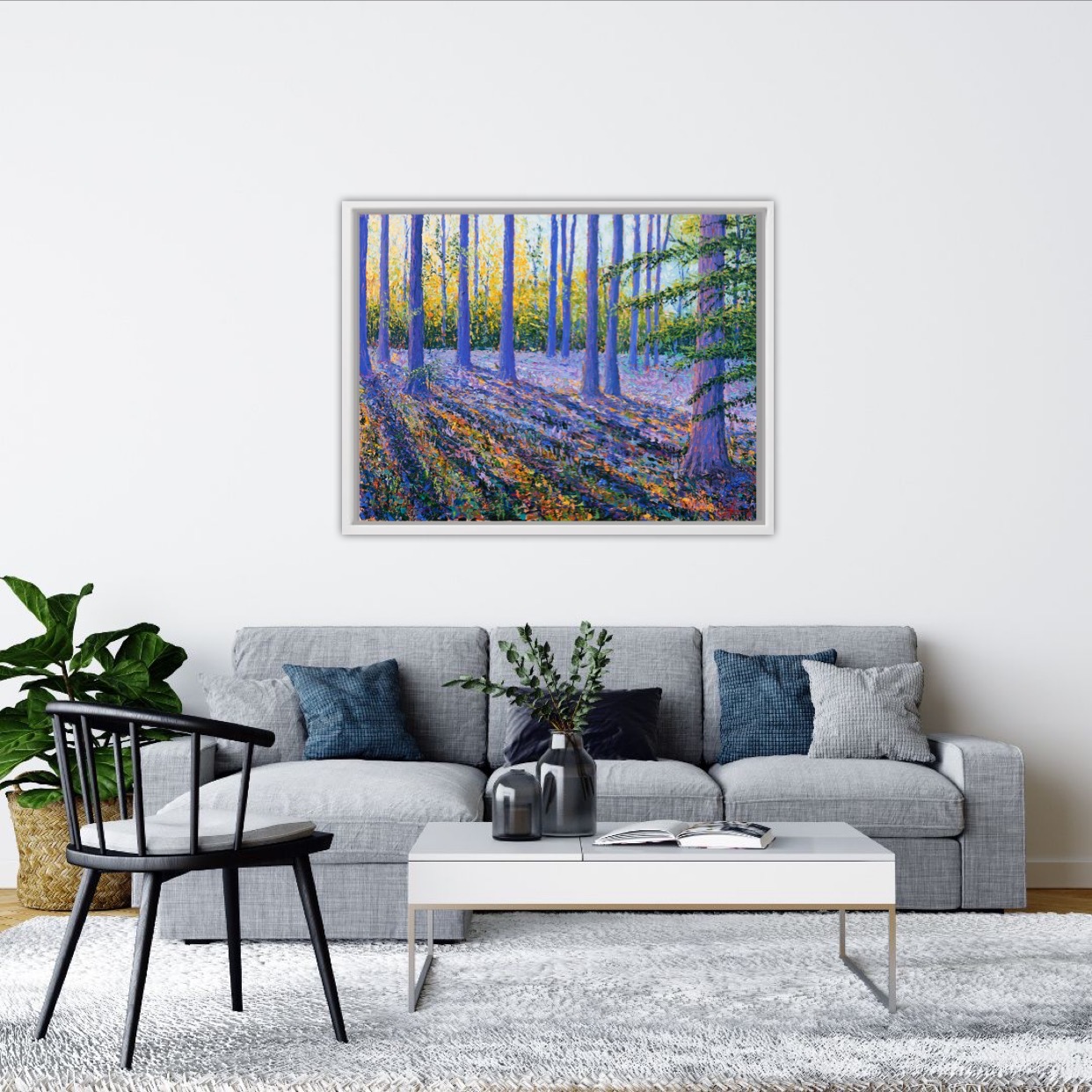 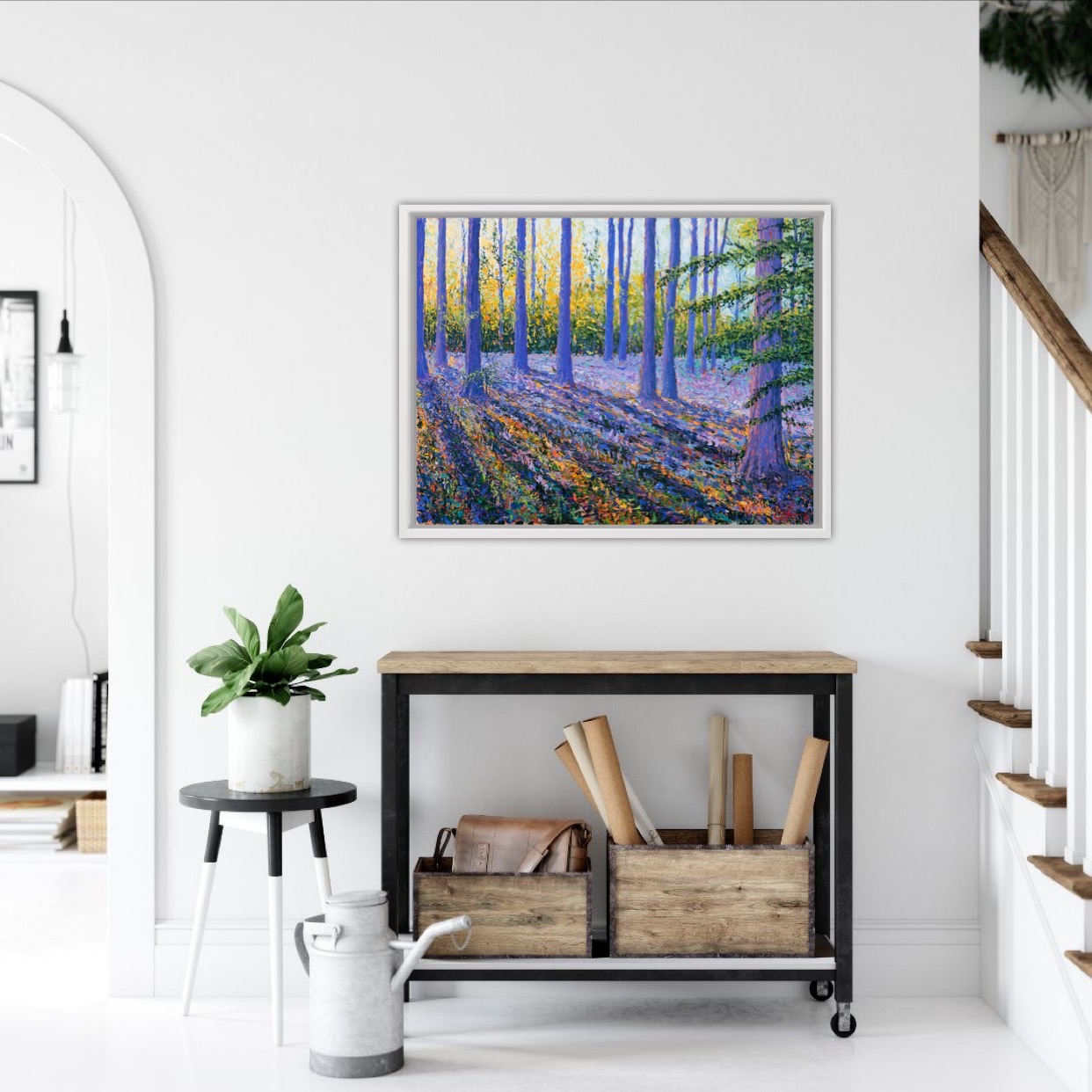 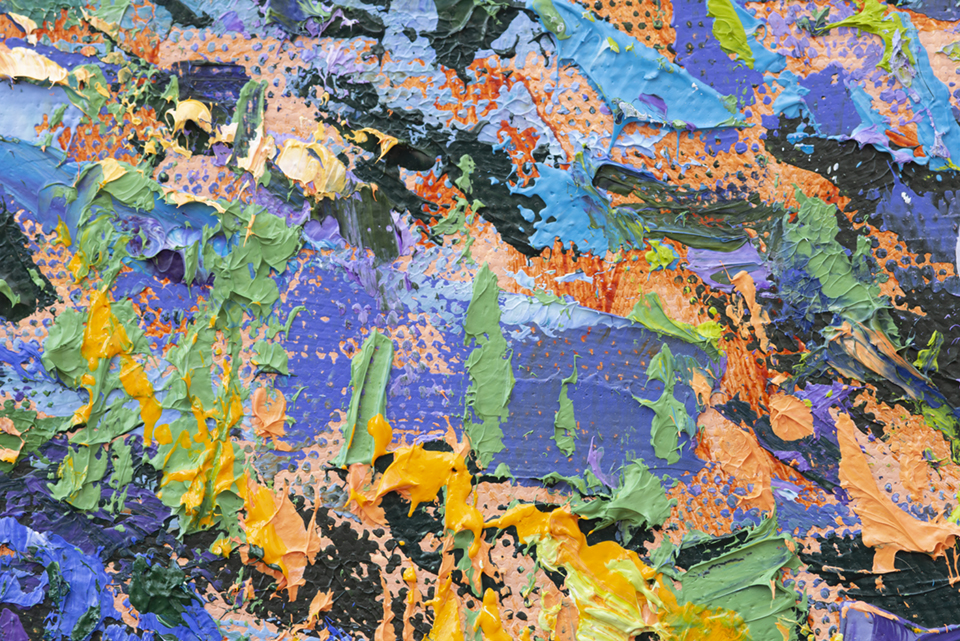 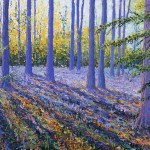 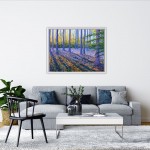 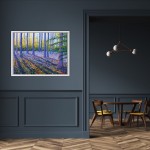 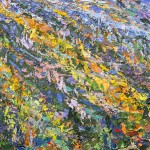 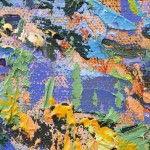 Click here to View all artworks by Lee Tiller

Painting by Lee Tiller – Euphoria I

This impressionist painting was created using a palette knife rather than a combination of artists brushes. As a painter I endeavour to evoke an emotional response through the aesthetic placement of colour and texture. I find that using a knife palette enhances this process.

Contrary to how it might appear, a limited colour palette was employed in order to unify the overall colour harmony and to help to convey the sense of place and tranquility. In fact just five colours are employed in this painting (plus a touch of red for the signature). As an impressionist painter, I apply the broken colour technique pioneered by the French impressionists of the 19th Century, and ultimately bought to perfection by Monet in the early 20th Century.

The harmonious feel of this painting is achieved by understanding the characteristics and effects of layering paint, the placement of hues with similar tonal values, and mixing a maximum of two specific colours together. I am careful to avoid mixing a third hue because it can ‘grey’ of dull the vibrancy of a particular combination. Equally, a pure colour on its own can appear too brash and jarring, so careful and often subtle ratios of mixing are vital in order to temper a particular colours exuberance or an over enthusiastic voice!

Euphoria I uses a combination of linear and atmospheric perspective. The radial shadow effect creates a converging design for the viewer, and the atmospheric impression is enhanced by gradually reducing the amount of visual information and tonal strengths of colours. The playful interaction of shadow and light fascinates me.

I enjoyed creating minute chromatic variances, that when placed together often resonate like a musical note. This effect creates a virtual ‘shimmering’ quality to a painting. When viewed from the correct distance, these nuanced dabs of colour and tonal contrasts blend to form a cohesive and unifying effect. It’s always a joy for the viewer to discover a microcosm of colour. Monet was a particular master of this technique. The paint is applied slightly impasto which adds to the liveliness of the surface.

Initially the blank canvas was covered in a pale warm reddish brown hue, elements of which are left to deliberately show through the broken colour, and again add to the overall unifying effect.

‘Euphoria I’ is framed in a white contemporary wooded frame of approximately 100mm width.

Lee was born in Berkshire in the UK and now lives and paints amidst the mountains of County Kerry in Ireland. His studio, “the yellow house” which is adjacent to his home is an old converted bothy (small traditional barn) that overlooks a glacial valley known locally as ‘The Pocket’. Lee says… “I draw immense inspiration from the West Coast of Ireland. Its untamed beauty provides endless contrasts to our otherwise orderly state of human existence. The natural majesty of the mountains with their dramatic terrain often leave an unsettled air of intimidation, but can conversely serenade you with a calming gentleness too. It is a magical place indeed.” “I have long been inspired by the 19th Century impressionist painters who explored colour in a way that was hitherto unseen. The immediacy of impressionism provides the viewer with their own intimate experience of place and time, and is very much a case of show, but don’t tell. I love that people can interpret my paintings in a personal capacity. “ On more than one occasion Lee’s work has been likened to Monet and Van Gogh, and it’s easy to see where his major influences lie. Lee’s paintings are collected worldwide and can be found in private collections throughout both hemispheres. Painting in oils, his artistic works cover a diverse range of natural history subjects from marine wildlife through to wild chromatic impressionist landscapes. For more information on Lee Tiller's works please contact Deborah Allan at Deborah@wychwoodart.com/01869338155