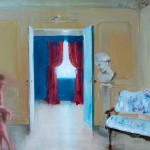 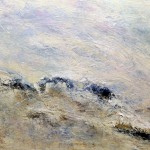 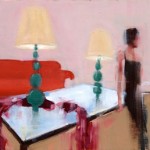 Richard Twose. Odysseus – Penelope Waiting
I recently reread the Odyssey and wanted to explore how to use narrative in a different way in the Interiors Series.
The frame is 4cm deep and 2 cm wide, simple, modern, off white. The painting is ‘floated’ leaving a shadow line around it, exposing the rough edges of the painting