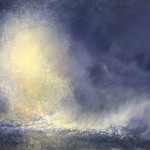 Click here to View all artworks by Tony Hinchliffe 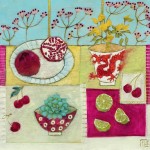 Promise, Tony Hinchliffe, Oil on canvas, 120 x 90cm.
Inspired by a piece wrote by the artist himself:

“I know someone who once made a promise, after a while circumstances changed making that promise harder to adhere to. They kept that promise though and followed their chosen road blindly to a point that their perspective became a thief, they felt trapped and alone but persevered, as time became a made up word a void appeared on that road. The thought of sharing that promise became unimaginable, the light surrendered, chewed to pieces within that void, dissolving identity into darkness.

It seemed inevitable that at some point something would give, but it didn’t, enduring each day holding onto it through an inaudible silence, a silence that watched from a distance with seemingly no polar opposite.
One day the darkness began to weep like an arsonist with nothing left to burn, then something deliciously new appeared and decided to fill that void with sunshine, with that sunshine came a resolve suggesting a brand new beginning.

They never did brake that promise and only with this new clarity of light did that promise become relevant to the person it was made for.”

Tony Hinchliffe has original artworks for sale with Wychwood Art in their art gallery and online. Tony Hinchliffe is a contemporary painter who works as a full-time artist from his studio in Northamptonshire, selling his first commission at just 11 years old, Tony has been honing his craft for many years. Selling his artwork and the copyright worldwide through an agency has seen Tony embrace a whole range of subjects. They include figurative, abstract/realism, landscapes, seascapes and animals. Commenting on his seascape painting Tony said “I have always been drawn to the ocean. The light on the coast can be very special at times, showing off the ocean as a very sensitive  creature and constantly reforming, a power source without a shred of arrogance. A recent painting trip to the Gower Peninsula found my dog and I walking in anticipation with all my painting equipment for  several miles to an intimate piece of coastline. I set up my easel close enough to the breaking waves to get a little damp. The morning mist  amplified the colours in all directions. When the waves broke they left a comforting fizzing sound as the water patiently fell off the rocks to regroup. Colours were constantly changing; blue would very quickly turn towards a subtle vanilla grey within a few minutes, eventually dampening out the sun. The warmth of the sun would gently burn through in places which gave the illusion of a very secretive and happy sky. For me working quickly and without fuss is a key element to depicting such a scene.” Back at his studio, Tony really enjoys the freedom of  abstract/imaginary landscape painting. This gives him the chance to capture a mood with his brush work and look at the colour considerations, a little differently to chasing  realism. This method often brings with it a wonderful sense of escapism.  Tony Commented “I often start by painting an imaginary sky then asking myself how would I feel standing  under that sky? I then work according to how I have  answered that question.” To discuss any art works or to commission art by Tony Hinchliffe, please contact Deborah Allan on deborah@wychwoodart.com or call 07799 535765 / 01869 338155.