Hydrangeas In Sunlight by Trevor Waugh 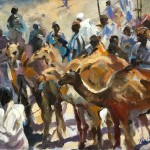 Market In Morocco by Trevor Waugh