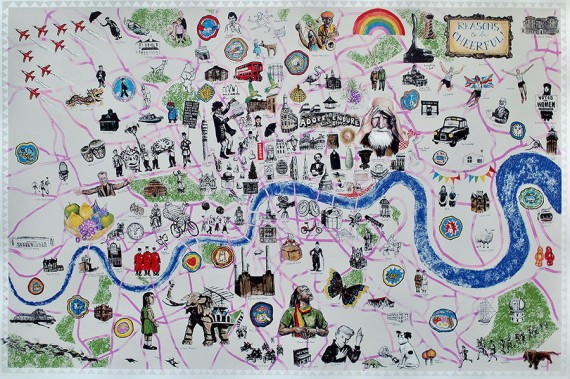 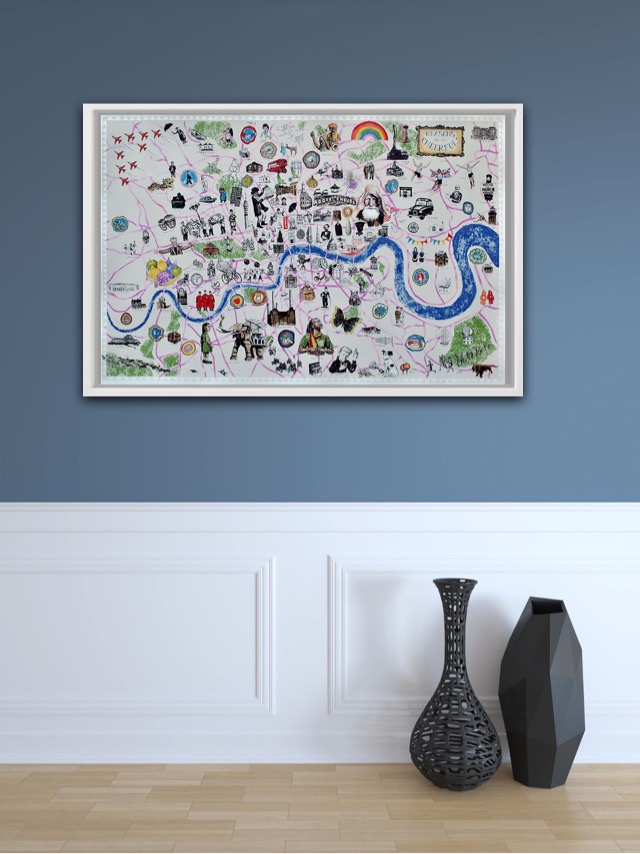 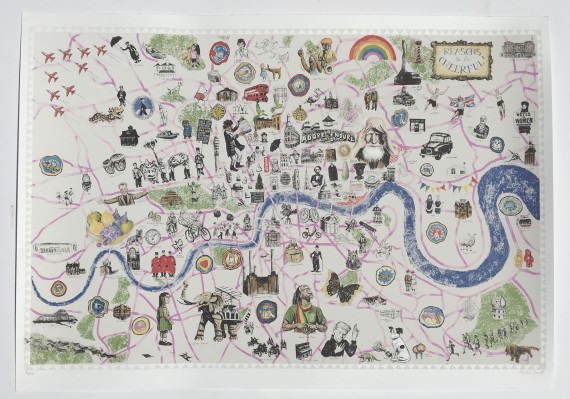 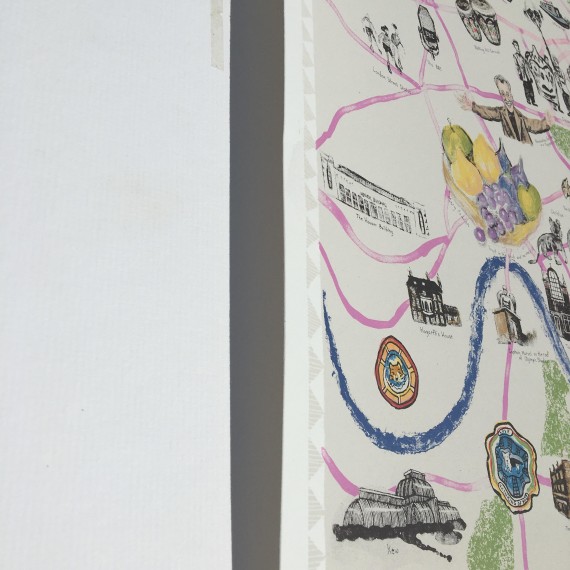 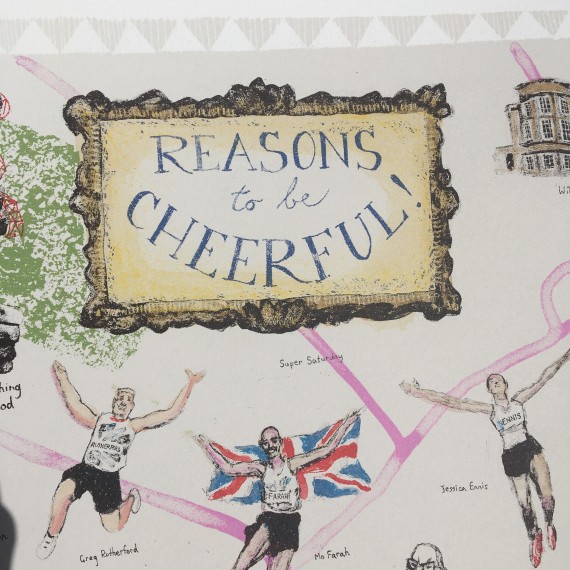 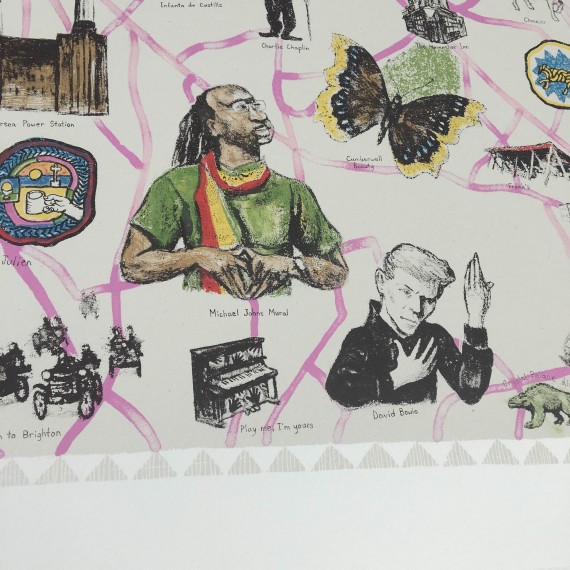 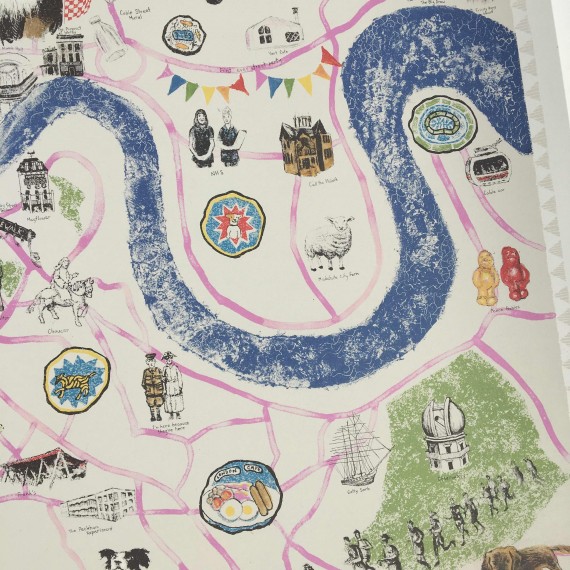 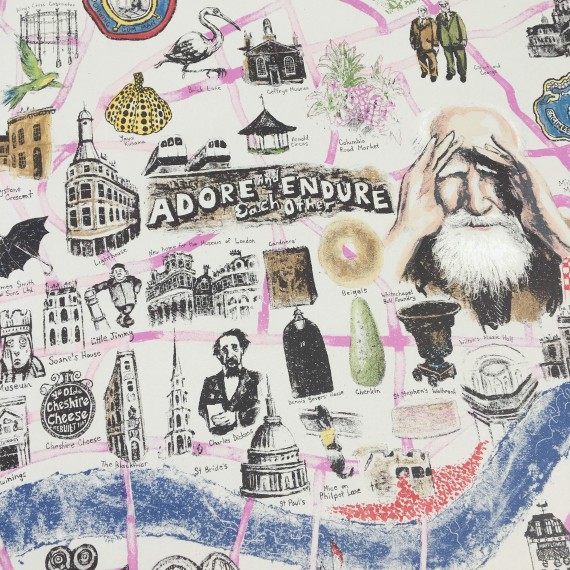 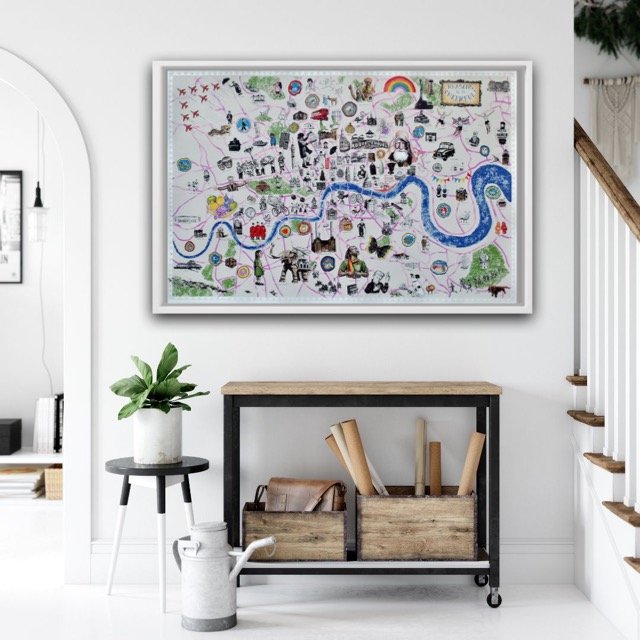 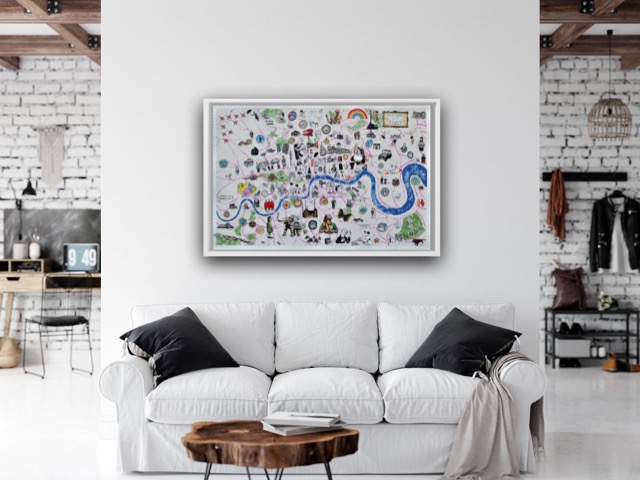 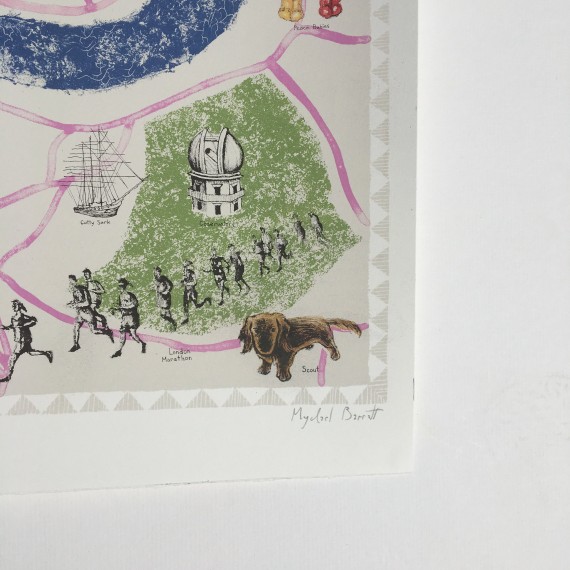 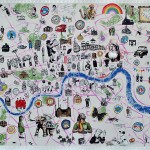 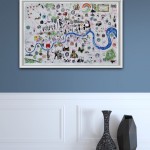 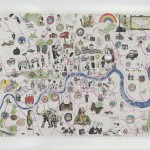 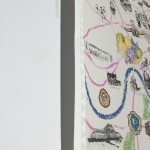 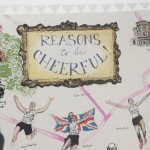 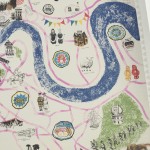 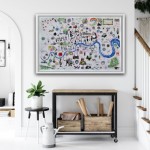 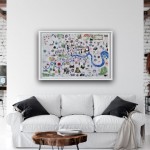 Click here to View all artworks by Mychael Barratt 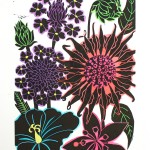 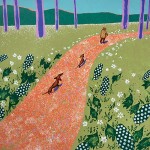 This product is out of stock! Please see similar prints by Mychael Barratt here.

Reasons to be Cheerful, Mychael Barratt
Unframed Limited Edition Silkscreen Print of 100
Silkscreen Print on Paper
Size: H 76cm x W 110cm
Signed and titled
Sold Unframed
Please note that in situ images are purely an indication of how a piece may look.

Reasons to be Cheerful is a limited edition silkscreen print by Mychael Barratt.

Reasons to be Cheerful – Key
Reasons to be Cheerful is an episodic map of London ephemera, history, urban myths and legends. The focus is unapologetically cheerful and optimistic. Below is a key to the references, most of which are labelled. I have included an explanation where needed.
Abbey Mills Pumping Station, Stratford (a Victorian sewage pumping station designed by Joseph Bazalgette)
Ada Salter (social reformer and one of the first woman councillors in London. Honoured with a statue in Southwark Park)
Arnold Circus (bandstand in the middle of the circus at the heart of the Boundary Housing Estate in Bethnal Green)
Battersea dogs Home (I’ve used one of Ben Wilson’s gum paintings to depict this wonderful charity)
Battersea Power Station and pig (Pink Floyds inflatable pig floats above the Battersea Power Station for a photo shoot for the cover of their Animals album)
BBC
BFI (British Film Institute/ National Film Theatre)
Beigels (beigels from the famous Beigel Bake on Brick Lane)
Bibendum (former Michelin Tire Art Deco building converted to a complex of shops and restaurants. The Michelin man on the bike is from one of its stained glass windows)
Big Draw (The Big Draw is a visual literacy charity and annual festival run by the Campaign for Drawing)
Bird Mural (on Brick Lane)
Blackfriar (The Blackfriar, a pub near the north end of Blackfriars Bridge)
Bob Dylan in Crouch End (the famous musician visited Crouch End in the 1990s)
Borough Market (one of the oldest markets in London, originally dating back to the 12th century)
British Museum (Lewis chess piece)
Brunswick House (glorious listed building in Vauxhall that houses an architectural salvage business – Lassco)
Camberwell Beauty (species of butterfly first discovered in Camberwell)
Cable car (Emirates Air Line cable car links up Greenwich Peninsula with the Royal Docks)
Cable Street Mural (commemorates the Battle of Cable Street and was painted by Dave Binnington, Paul Butler, Ray Walker and Desmond Rochfort)
Call the Widwife (Nonnatus House in Poplar used as a location for filming Call the Widwife)
Charles Dickens
Charlie Chaplin (born in Walworth)
Chaucer (author of The Canterbury Tales Geoffrey Chaucer was born in London)
Chelsea Arts Club (This logo is from a sketch by Whistler, one of the founders of the club)
Chelsea Arts Club Procession (this depicts the New Year’s Eve processions that members would make from the club to their infamous parties at the Royal Albert Hall)
Chelsea flower show (at the end of the Chelsea Flower Show, visitors can be seen parading down the streets carrying plants from the breakdown)
Chelsea Physic Garden (statue of Sir Hans Sloan by Simon Smith)
Chewing Gum Artist (Ben Wilson paints pictures on discarded and trodden pieces of chewing gum. They can be found all over London and I have included multiple references to them on my map)
Chinese New Year (these dragons parade through London every Chinese New Year (this should probably have been in Leicester Square)
Christian the Lion (was a pet lion bought by Harrods by Chelsea residents John Rendall and Anthony Bourke)
Christmas tree in Trafalgar Square (annual gift to the people of Britain from the city of Oslo)
City Farm Mudchute, Isle of Dogs
The Clock at the Tate (24-hour film installation by artist Christian Marclay)
Columbia Road Flower Market
Crystal Palace Dinosaurs (commissioned in 1852 to accompany the move of the Crystal Palace after the Great Exhibition in Hyde Park)
Cutty Sark (historic sailing ship now a visitor attraction in Greenwich)
Dalston Peace Mural (on Dalston Lane, created by Ray Walker)
David Bowie (was born in Brixton)
Dennis Severs House (this is the front door of the glorious domestic museum in Spitalfields created by Dennis Severs)

Buy Mychael Barratt printmaker works with Wychwood Art gallery online. Mychael Barratt was born in Toronto, Canada, however, considers himself to be a Londoner since arriving for what was supposed to be a two-week stay thirty years ago. He is a narrative artist whose work is steeped in imagery relating to art history, literature, theatre and everything else that overfills his bookshelves. He was an artist in residence for Shakespeare’s Globe Theatre throughout Mark Rylance’s reign as Artistic Director. In 2011, just prior to the 2012 Summer Olympics, he was commissioned to paint a large-scale mural on T. V. Edwards Solicitor’s building on the Mile End Road. He is a Fellow of the Royal Society of Painter-Printmakers and in 2013 was elected to be its twelfth President. His work is held in many important collections including Her Majesty The Queen, British Museum, the British Library, Ashmolean Museum, V & A Museum, and the Jiangsu Museum of Contemporary Art. Mychael Barratt is available online and in our art gallery. To discuss any works please call 01869 338 155 or email deborah@wychwoodart.com