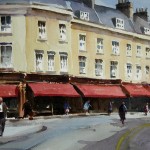 Shoppers in Bath by Trevor Waugh